Mostly Harmless: not what the title suggests 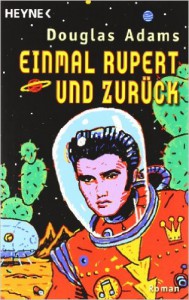 This is the last book in the Hitchhiker Trilogy pentalogy, and it was supposed to be a bad book, according to several reviews that I read. It was even described as depressing, not worth the read and that one would be better off by reading So Long, and Thanks for All the Fish as the final installment and then stop, in order to keep the series in good memory.

I shouldn’t have listened to those reviews, because saying that this book was bleak or even sad is utter BS. Granted, the undertone may be a bit less cheerful than in the other books, but nevertheless the story is brimful with the crazy funny stuff I adore Douglas Adams for.

Here are some examples – without spoilers or further explanation – to pique your interest, if you have refrained from reading the last Hitchhiker book until now:

All of these examples are only from the first eighty pages; I stopped taking notes afterwards. So stop giving me that “Oh, he had a bad year when he wrote it” stuff. I know, Douglas said so himself, but still!

If you can’t see the loads of humor in this book, then, dear reviewer, you’re a Vogon.